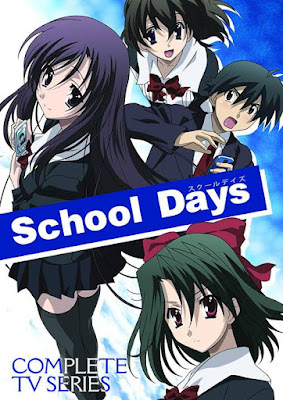 Summary:
Makoto Ito is a young Japanese high school student beginning his second term at the fictional Sakakino Academy. During his daily train rides to and from school, he becomes infatuated with fellow student Kotonoha Katsura; a girl that also commutes. When a new classmate acquaintance of his, Sekai Saionji, discovers his secret crush on Kotonoha, she helps introduce both of them to each other and over time they grow closer and agree to date. However in spite of her proud and triumphant matchmaking efforts, Sekai inadvertently becomes jealous of the new couple, having also developed feelings toward Makoto.

The following afternoon on her way home at the nearby train station in front of the school, Sekai finds Makoto waiting for Kotonoha to rendezvous for a date. He sits with her and reiterates his appreciation for her help, and feeling heavily indebted, offers repayment anyway he can. Though she believes he is overreacting, Sekai decides to redeem her obligation by placing a kiss on his lips as her train pulls in; quickly rushing into an open passenger car and happily bidding a dumbstruck Makoto luck on his date.
Anime name: School Days
スクールデイズ