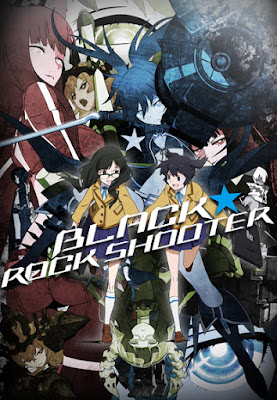 Summary:
It isn’t the world you know. There wanders a girl with jet-black hair, ebony clothes, and a strikingly blue, glowing eye. Her name is Black★Rock Shooter. With a huge cannon in hand, she throws herself into a fierce battle…

Meanwhile, in another world, middle-school student Mato Kuroi is drawn to Yomi Takanashi, her classmate with an unusual family name. Mato does her best to talk to Yomi, who just won’t open up. Yu Koutari mocks her best friend Mato’s efforts but at the same time, supports her. Mato also finds herself surrounded by other colorful characters at school, like the eccentric school counselor, Saya Irino, and the hot-blooded captain of her club club, Arata Kohata.

Then, one day, the window of opportunity opens. After Mato sees that Yomi has her favorite picture book, “Li’l Birds At Play”, they strike up a conversation and Mato is invited to come over to Yomi’s house. There, they gradually break the ice, until a girl in a wheelchair appears. This is Yomi’s best friend, Kagari Izuriha…
Anime name: Black★ Rock Shooter
ブラック☆ロックシューター